These Occupations in Illinois Have Higher Rates of Divorce 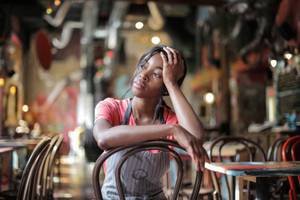 Certain jobs correlate with divorce so frequently that they create a bit of a chicken-or-egg question. Which came first - the job or the likelihood of divorce? Does a person who is more likely to get divorced pursue certain professions, or do some jobs really interfere with a marriage? Although each marriage is unique, research suggests that some jobs are correlated with much higher rates of divorce. And while financial stability and life satisfaction influence marital happiness, a higher salary is not necessarily correlated with lower divorce rates. Here are some of the jobs in Illinois with the highest divorce rates.

Almost tied at roughly 52 percent, casino managers and bartenders are in a line of work that exposes them to late hours, alcohol consumption, and fresh new faces on a regular basis. Add to that an unpredictable income, holiday work schedules, and a relentless people-pleasing personality, and you might have a combination for marital trouble.

Flight attendants check in with divorce rates just over 50 percent. With two large airports and several smaller municipal airports, Illinois has an abundance of flight attendants coming in and out of town every day. Similar to bartenders, flight attendants have irregular schedules, frequent exposure to new places and people, and, although they are not permitted to work intoxicated, notoriously high levels of substance abuse.

People who work with extruding, pressing, compacting, or forming machines have stressful, dangerous jobs. Long-term exposure to metals and plastics may further endanger their health, and the necessity of working with small pieces in tight spaces could put anyone under pressure. Divorce rates in production and textiles industries hovers just under 50 percent.

Which Occupations Have the Lowest Rates of Divorce?

Unsurprisingly, perhaps, religious clergy and other religious leadership have among the lowest occupational rates of divorce. Approximately one in five employees working in religious services gets divorced. This is roughly matched by rates of divorce among surgeons, engineers, software developers, and physical therapists.

Regardless of the line of work you or your spouse are in, if you are considering divorce you may want the help of an experienced Kane County divorce attorney. At Shaw Sanders, P.C., we offer a judgment-free environment with an emphasis on mediation and conflict reduction whenever possible. We offer free case reviews so you can meet our friendly and skilled attorneys and start getting the help you need. Call us today at 630-584-5550.