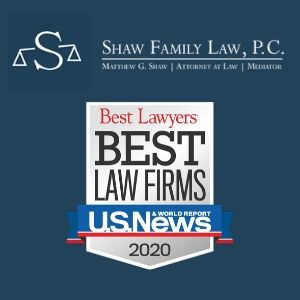 Shaw Sanders, P.C. in St. Charles was recently recognized by Best Lawyers. The Best Lawyers’ lists of peer-reviewed and recommended lawyers serve as a guide to the best individuals and firms in their fields through a proven methodology.

Best Lawyers is the oldest and most respected publication in the legal community. Recognition in Best Lawyers is widely regarded as an honor, conferred on a lawyer by his or her peers. For more than 30 years, their publications have earned the reputation as the most reliable, unbiased source of legal referrals anywhere. Their lists of exemplary lawyers are compiled by conducting extensive peer-review surveys. If the votes for a lawyer are positive enough for recognition in Best Lawyers, that lawyer must maintain those votes in subsequent polls to remain in each edition.

Attorney Matt Shaw served as the child support attorney for Kane County Circuit Court Clerk’s Office from 1987 to 1995. Mr. Shaw opened his own law practice concentrating in family law in 1991. In 2000, he co-founded the law firm of Shaw, Jacobs, & Associates, P.C. in St. Charles, Ill., which concentrated its practice in family law, including dissolution of marriage, financial issues, and custody litigation. In 2016, Matt reopened his own law firm Shaw Sanders, P.C.

Attorney Matt Shaw, founder of Shaw Sanders, P.C., has been awarded the designation of Elite Lawyer in the field of family law.

The Elite Lawyer rating service recognizes attorneys who display a high level of competence in their practice and receive acknowledgments from their peers, community, bar, and committees. The Elite Lawyer Award assures each attorney chosen for the directory has been nominated by their peers for excellence in the practice of law. The honor is only given to lawyers who have met or exceeded the criteria of a rigorous, multi-phased selection process. It recognizes top-rated attorneys for their outstanding service in their specific area or areas of practice.

From his firm's office in St. Charles, Shaw serves clients throughout Kane, DuPage, Kendall, and DeKalb counties. After earning his undergraduate degree from Illinois College, he received his Juris Doctor from the Northern Illinois University College of Law. Prior to founding Shaw Sanders, P.C., he served as child support attorney for the Kane County Circuit Court Clerks Office and practiced in general and family law, founding three different law firms. With more than 30 years of legal experience, he maintains a 10.0 Superb Avvo Rating and has been recognized by Leading Lawyers and with the Distinguished Rating from Martindale-Hubbell.

Attorney Matthew G. Shaw Named to 2019 Edition of The Best Lawyers in America

Shaw Sanders, P.C., is proud to announce that attorney Matthew G. Shaw has been selected for the 2019 edition of The Best Lawyers in America. This is the first year that he has been included in this annual list of outstanding attorneys from throughout the U.S.

St. Charles, Illinois, attorney Matt Shaw has practiced family law for more than 30 years, both with his own firm, Shaw Sanders, P.C., and as the co-founder of Shaw, Jacobs, Goostree & Associates, P.C. He is also certified as a mediator and guardian ad litem and was the child support attorney for the Kane County Circuit Court Clerk’s Office from 1987 to 1995.

Shaw was again named a Leading Lawyer in Illinois for 2018. He has earned a 10.0 Superb Rating from Avvo and a Distinguished Rating from Martindale-Hubbell.

Shaw Sanders, P.C., is excited to announce that attorney Matthew G. Shaw has been named to Super Lawyers’ list of outstanding attorneys in Illinois for 2019. This is the first time that he has received this honor.

Super Lawyers is a nationally recognized rating service that annually selects the top attorneys in each state based on independent research and evaluation by a peer panel. Attorneys who make the Super Lawyers list are among the top five percent of nominated attorneys in their state.

Shaw Sanders, P.C., is proud to announce that firm owner Matthew G. Shaw has earned recognition as a Leading Lawyer in Illinois for 2018. It is the seventh consecutive year he has received this honor.

Leading Lawyers, a division of the Law Bulletin Media, selects lawyers each year based on peer recommendation and internal reviews. Less than five percent of lawyers in the state receive the Leading Lawyers designation.

St. Charles, Illinois, attorney Matt Shaw has practiced family law for more than 30 years. He operated his own family law office from 1991 to 2000 and reopened it as Shaw Sanders, P.C., in 2016. In between, he was the co-founder of Shaw, Jacobs, Goostree & Associates, P.C. He is also certified as a mediator and guardian ad litem, having worked as a child support attorney for the Kane County Circuit Court Clerks Office from 1987 to 1995.